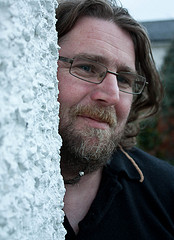 Everyone knows how hard the Edinburgh Fringe is, no one more than Michael Downey, but read his thoughts on overcoming the struggle and maybe gain a new way of looking at it…

Doing the full run of the Edinburgh Comedy festival is difficult no matter who you are. Even if you hadn’t been in the So You Think You’re finals eleven years ago, were involved in a major car crash ten years ago  and got back into comedy in the last two and a half years it’s going to take a lot out of you. The intervening seven and a half years of rehabilitation, physiotherapy and constant exercise won’t make the whole experience easier. The whinging and bitterness that you acquired as a consequence of the accident may, either help or, be even added to during the course of the run.

I’m not foolish enough to think that I’ll never feel sorry for myself again, I don’t ever expect to make a baked Alaska or end up in a relationship with Halle Berry but those minor disappointments can be easily overcome after challenging myself to do Edinburgh has helped me to overcome the impact that the car crash ten years ago has had on me.