Take A Trip Down Memory Lane

‘A lot of comedians like to hit you with 100 per cent from the start. Not me. I’m more like 60 per cent… maybe less,’ smiles Australian stand-up Hannah Gadsby as she casually pours herself a cup of tea and hands round a small plate of biscuits.

It’s a deliciously casual start to a lackadaisical show that belies her biting, razor-sharp wit. When the recipient of the hot brew says ‘thank you’, Gadsby smiles back approvingly and coos ‘Oooh manners.’

With serendipitous, split-second timing, a small group of latecomers shuffle in noisily at the back of the room and without hesitation, she deadpans, ‘No manners.’

Underestimate her at your peril. Gadsby exudes an air of indifference as she relives moments from her high school days when gossip became gospel, and then promotes her Tasmanian hometown and its two bona fide tourists attractions: Cape Grim and Dismal Swamp.  Recollections of her cycling expedition through Vietnam and her first (and only) bungee jump are acutely observed and she mercilessly poles fun at her inability to strike up a conversation with a girl she fancies.

‘I think it’s better to make impression than a bad impression,’ she confides, ironically making a huge impression on us. Gadsby does have three special talents, which eased her path through high school, and she gladly shares them with the group to cacophonous laughter. “I’m not building to a big finish in life or in this show,’ she concludes and true to her word, she ambles off the stage in the same casual manner in which she arrived. It’s the perfect way to close an understated yet hilarious hour. 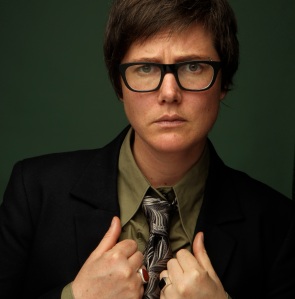 For More info about Hannah’s show, have a look at her Show Page

To learn about Hannah’s other show Mary. Contrary, exploring the art of the Virgin Mary go here

and to buy tickets to Hannah’s show go here!