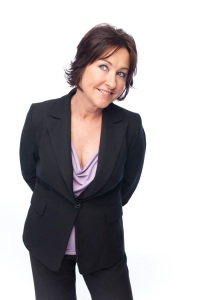 Fiona O’Loughlin is known in Australia as The Queen of Comedy, when the Alice Springs mother of five Fiona O’Loughlin started doing stand-up later in life than most comics, her hilarious stories of housewifery and motherhood were an immediate hit. Her first festival show, for example – Fiona And Her Sister (And Some Weird Guy) earned her the Best Newcomer Award at the 2001 Melbourne International Comedy Festival. She is also a regular sight on Australian television with guest appearances on Sunrise, Good News Week, Spicks and Specks, The World Stands Up and a heap of Comedy Festival Galas.

In more recent years Fiona has overcome a well-documented ‘battle with the bottle’ after collapsing drunk onstage at a prestigious theatre performance in Brisbane in front of 600 alarmed audience members; her private addiction became instant national front page news, and from there Fiona’s journey back from the brink began. This, like the other aspects of her life, has become ‘material’ for her stand-up. And Fiona is even funnier sober.

“O’Loughlin thought she needed a double vodka to be funny. This show proves that she doesn’t” Independent Weekly

Find out all you need to know here