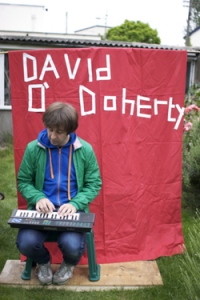 Read the full review below

Buy Tickets while you still can here

There’s something to be said for the dependable comic. No, they may not offer edgy innovations that will change the landscape of standup, but they can still put on a bloody good show. Enter David O’Doherty.

Seize the David O’Doherty doesn’t so much follow a narrative as simply addressing two major issues in his life: a recent breakup and an overwhelming fear of rodents. But the comic isn’t asking for sympathy, or reliving a horrifying return of his teenage years of sexual reticence (as is so common amongst male standups). Instead, the show functions more as a series of whimsical observations about everything from his distaste for vintage shops to his father’s ineptitude with chip and pin devices.

It is this comic simplicity that has cemented O’Doherty’s status as a Fringe favourite: there is no esoteric elitism to be found in his anecdotes, just a dishevelled Irish comedian with a rudimentary knowledge of keyboard playing and a deft ability to get his crowd onside within moments.

The energy does tend to dip a little in the second half of his set, though, but a brilliant segment in which he sings excerpts from “the Torah of the ladies”—a decades-old Cosmo sex tips book—livens things up again with a suitable dose of silliness. For a man who repeatedly states that he only has three “proper” jokes in his repertoire, O’Doherty’s ability to sustain an hour of irrelevant and irreverent comedy seems pretty impressive.