A childhood fascination with Willy Wonka led an Australian comedian to track down the original Veruca Salt. Matthew Hardy and Julie Dawn Cole tell ‘The Lists’ Brian Donaldson how all this led to a Fringe comedy. 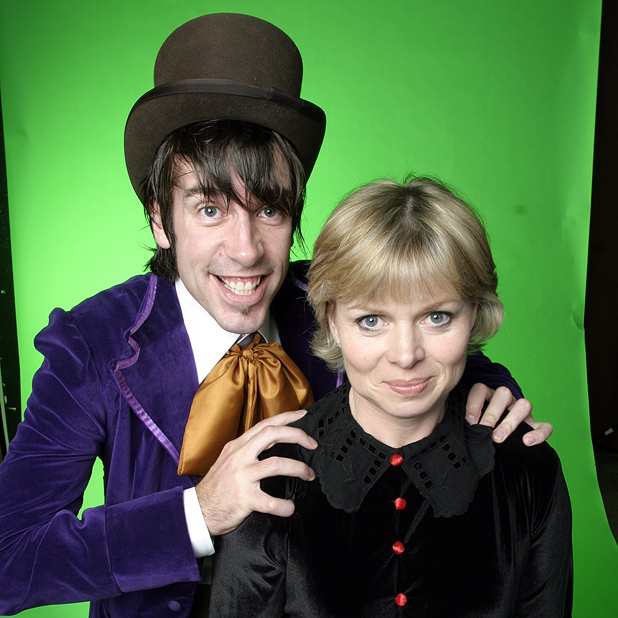 Everyone reaches a low point in their lives, when it feels natural to seek solace in objects that remind us of happier, perhaps more innocent times. When Matthew Hardy was dumped by two girlfriends (years and continents apart), he couldn’t stop sticking on the first movie he remembers watching. The 1971 Willy Wonka and the Chocolate Factory is an iconic film for many reasons: the performance of Gene Wilder as the maverick Wonka; the sinister Slugworth, who appears to be whispering poison in children’s ears before his true, honourable intentions are revealed; the LSD-imbued terror of the chicken decapitation scene. Not to mention Golden Tickets, rivers of chocolate, Everlasting Gobstoppers and Oompa-Loompas.

For Hardy, the real pleasure in the film was to be had in the performance of little Julie Dawn Cole as Veruca Salt, a name now synonymous with selfish, brat-like behaviour. ‘She was my favourite character from the movie when I was five,’ recalls Hardy. ‘I couldn’t believe that a little girl was so abrasive to grown-ups and I’ve since spoken to a lot of women who liked her when they were kids and still do now; it first gave them the idea that a female could be so authoritative.’

When long-suffering flatmates suggested to Hardy that he should get his Veruca obsession out of his system and track down the actress who would now be a grown woman, it set off a sequence of seemingly unconnected events. These led Hardy to realise that there could be something in all this and maybe, just maybe, a comedy show might emerge. ‘I went to Long Island to see an old mate of mine, a school teacher, who asked me to talk to his class about Australia. At one point, one of the kids bit into his jelly and peanut butter sandwich and said, “Man, this is scrumdidilyumptious!”, which is such a Wonkaism.’ On a later trip to Manhattan, he was chatting up a woman in a bar who enticed him into buying her an expensive cocktail. ‘She ordered something called an Everlasting Gobstopper, which cost about 16 bucks and was written up on the board in the Wonka font.’

Believing all this to be too much of a coincidence, he sent an email to someone who appeared to represent Julie Dawn Cole. ‘My agent called me and said, “Another nutter wants to do an interview with you”,’ she recalls. ‘I must have been in a rather generous mood and the fact that he was in Australia made me think, “He’s far enough away, he’s not really going to come stalking.” I checked on the internet and he seemed to be who he said he was.’ A series of emails and calls followed and a script began to form with Hardy eventually inviting Cole out to Australia to help with PR for his burgeoning idea. ‘I thought that was all very jolly as I’d never been there before but I said if I’m coming all the way out there, I might as well be in it.’

With the project growing bigger than Augustus Gloop at an all-you-can-eat Frankfurter buffet, Hardy soon had a vision of the show’s structure as it stands today. ‘We had conversations that I would record and from those I’d try to construct a script. So, she’d be in England and I was in Australia at our respective psychiatrists, unburdening our issues of lost love or hurt or hope killed or whatever.’ Through those conversations, extra aspects were added, such as the reading of letters the young Cole wrote to her mother during the long months on the Wonka set.

While Matthew Hardy is a seasoned campaigner on the comedy circuit (during his first stint in London he earned enough from gigging to give up his day job as a toy soldier at Hamleys), the Edinburgh Fringe is an alien concept to Julie Dawn Cole. ‘I feel like I’m going back to being a student again. This is Matthew’s world, not mine. It’s going to be mad and scary and terrifying. For me, it’ll feel like standing in front of a train crash every night. But if I don’t like it, I don’t have to do it again.’

Still, at least at the end of each show, she’ll be able to forget all about Matthew Hardy and Willy Wonka and Oompa-Loompas until the next performance. Well, not quite. ‘We’re sharing accommodation,’ she says with a giggle. ‘We’ll be like an old married couple by the end of it. I’ll be nagging him, getting him to pick up his laundry. But we’re very good friends, so if I have to tell him, I will. In true Veruca Salt style.’