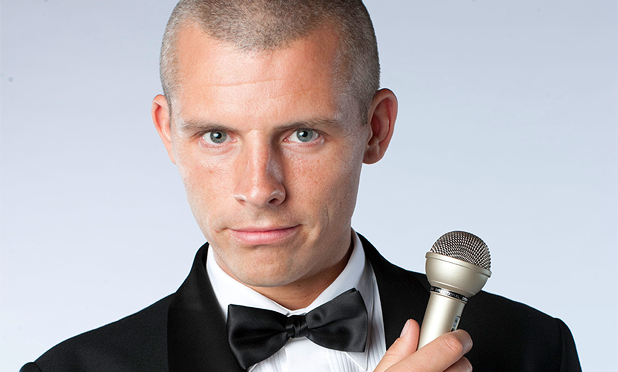 Des Bishop has wanted to tell his father’s story for a long time. The former model and actor, who had bit parts in Zulu and Day of the Triffids, narrowly lost out to George Lazenby for the role of James Bond in On Her Majesty’s Secret Service. After quitting acting to raise a family in New York, his father’s regrets were ‘ridiculous’, thought the comic. But when Bishop Snr had terminal cancer diagnosed, his eldest son realised that he finally knew he would share that story and it soon became the only thing on his mind.

We’re chatting just a few hours after Bishop completed his first skydive and a couple of days after recreating his debut threesome onstage, graphically, and somewhat horrifically, with Dara O’Briain and Jason Byrne. But the Irish-American has little time for the ‘macho bullshit’ of 007 and one of his current favourite routines is one in which he discusses male impotency. As someone who recovered from testicular cancer himself and who considers it less of a personal issue than his adolescent battles with drink and drugs or the gregarious outsider personality he developed when he left the family roost at 14 for the land of his forefathers, Bishop nevertheless doesn’t know if he’d be able to do this show now, ‘except for the fact that I’ve had the experience of joking about cancer before. It helps people to realise it’s not coming from a bad or exploitative place’.

Acclaimed at the Melbourne Comedy Festival in April, My Dad Was Nearly James Bond attracted comparisons to Jason Cook’s My Confessions for its honest portrayal of living with a dying father. But with Bishop Snr still alive at the time of writing, it’s a show that’s changing every day, with snapshots of the Edinburgh run likely to feature in an accompanying documentary being made by Irish broadcaster RTE.

‘As a comedian, you always feel the obligation to be funny,’ Bishop reasons. ‘But there’s an opportunity here to stay more honest, for something that’s pretty profound. The father-son relationship, the imminence of death, these things are worth joking about, because we’re all going to have to deal with them. At the same time, it’s worth not being overly flippant just for the sake of laughs. Every night I’ve reported to him how it’s going, so even when I’m away, our little project is still in existence. He’s been involved 100%.’