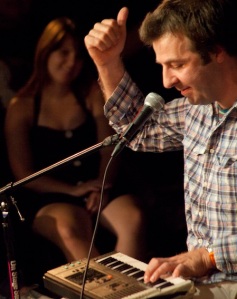 This show is classic David O’Doherty, there are the contrived rhymes, the nods to nostalgia and a bit where he’s exasperated with something and ends up laying on the floor. While it’s nothing particularly new, he does these very well. It’s the ultimate in surreal whimsy. He has some catchy new songs and there’s a certain amount of skill in making a scripted show look this un-prepared.

The capacity crowd were very much ‘his’ audience, there didn’t seem to be many people who didn’t know what they were in for and he really delivered the goods for them.

There was a kerfuffle during my show one night at the Fringe last year. Two drunk men were having an argument. In these situations, it’s best to turn on the fury cannons, say something rude to shut them up, and carry on. That is certainly what I should have done. Instead, I asked them what was wrong. One pointed to the other and barked, “He told me we were going to see Travis.”

I am not Travis. Travis are a famous Scottish band, who had a bigger show elsewhere in the city.

How this mix-up had come about, I’ll never know. Had his friend thought I was Travis? Or had he failed to get tickets and hoped his friend wouldn’t notice? At what point during my show had he started to get the inkling I was not Travis? You’d think the sight of an empty stage, save for a small battery powered keyboard might have tipped him off.

The audience delighted in hearing about their drama, but when I tried to get back to my show, the men went back to their argument. I asked them if they’d like to leave. They said “No”.

Then I remembered the best way to get drunks to do anything is with the promise of more drink. So we had an audience whip-round. The booze lure was too strong and as they stumbled off, they received a cheer much larger than I, or I’d guess Travis, did that night.

I recommend Claudia O’Doherty’s show, ‘What Is Soil Erosion?’ in the Gilded Balloon at 8.45pm. We’re not related. We met because we have the same surname and we have ended up writing two books together. The latest, ‘100 Facts About Sharks’, is launched at the Fringe this week.

David O’Doherty is Looking Up ****

David O’Doherty hasn’t been a fan of 2011. He’s been mugged twice, suffered a weight-decimating stomach infection and left the 18-34 demographic. Thankfully, he’s still got his mini-keyboard (plus an actual piano) to sing songs about wrist-emulsifying creams and birthday-celebrating sharks, all while wearing a fetching gold cape. His traditional “beefs” closing rant marks the peak of his consistent hilarity and is delivered with rasping panache. **** Laura Slattery